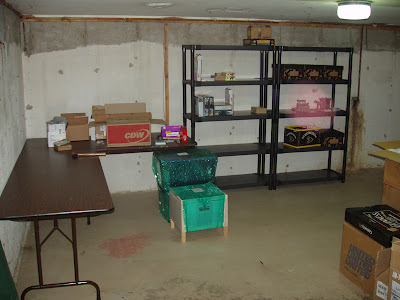 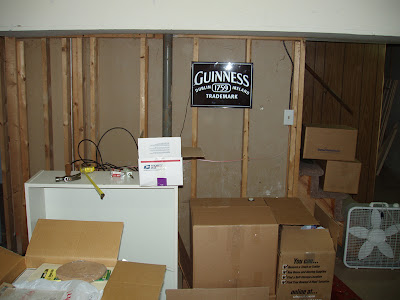 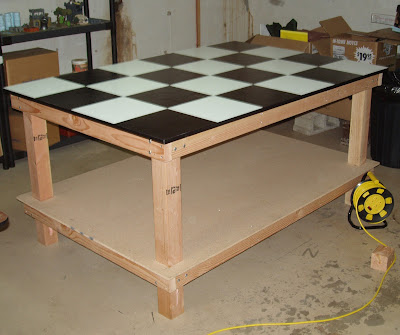 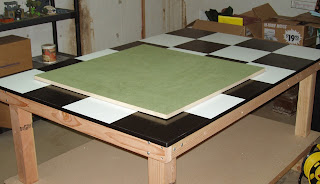 All that's left between me and completion is getting the terrain boards ready to go.  This was actually pretty fun, so it was a much better way to end it all then trying to clean a 5 year old stain off the wall.

Mixed in with the boards were all my extra materials.  It's all pretty thin and would cost a fair bit of money to replace so they're going in the truck along with all the rest of it. 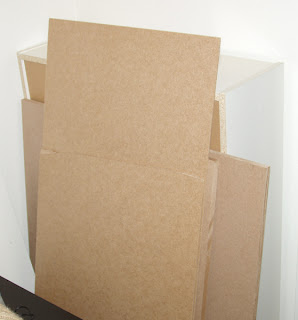 I've got a 3x3 board and a 4x4 board that breaks up into 4 sections to pack.  Which isn't all that bad - especially given the manageable sizes. 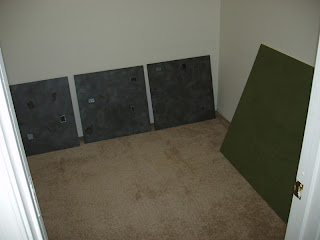 Just for funzies, here's the 4x4 in all it's glory. 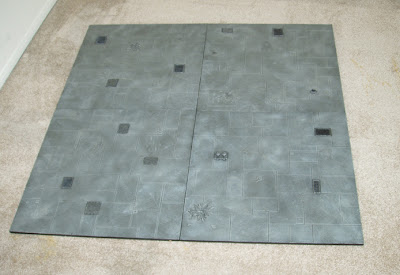 My plan to protect these things revolved around a bunch of old towels, some duct tape and my increasingly trusty plastic wrap. 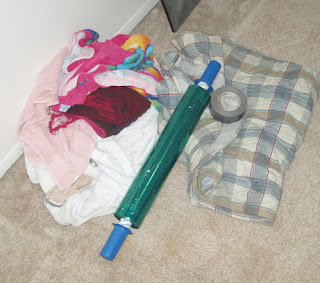 In a general sense, the idea is to first wrap the board in a blanket or towel...  (In the case of the 3x3, some extra towels were added in on the turf side for extra padding.) 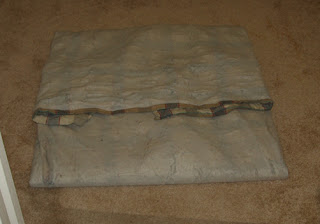 and then wrap some tape around the whole thing to keep it fixed in place. 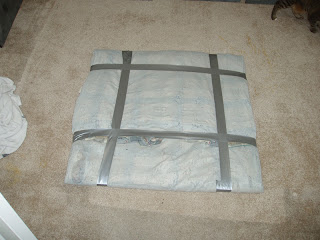 A few layers of plastic were added to make things more secure. 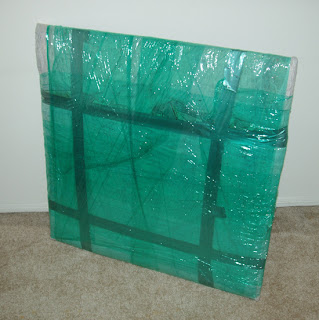 Lastly, some left over blue insulation foam was taped on to provide crucial protection for the corners. 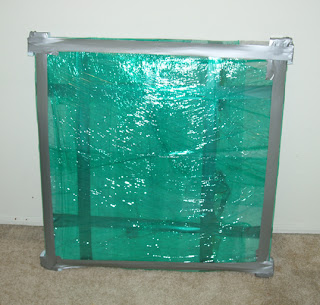 The 2x2 sections went down pretty much the same with the exception that I did them two at a time, face to face with some blue foam placed in between for padding. 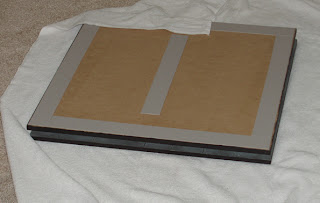 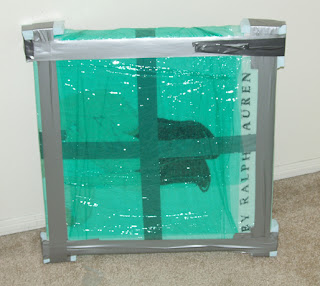 And the group shot.  I think this should do a pretty good job of protecting the investment. 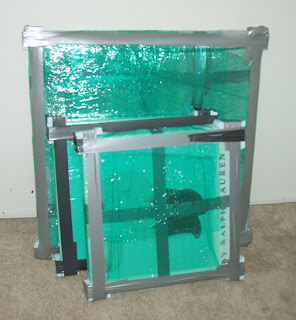 With this last little bit, all of my hobby stuff is packed. 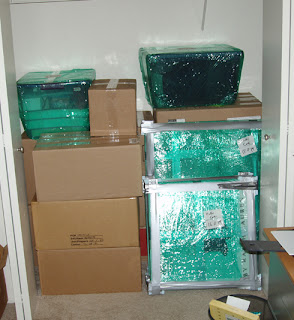 Except for that damn tress stand!  Shit. 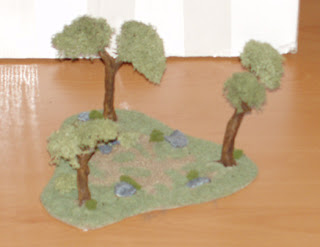 Now, if I may get serious for a bit:

The hobby cave Mk2 had been a much needed little haven, if you will, from the last few years of my life.  So the packing has just that little bit of a bummer in it.

It was a little 56 square foot closet that was completely mine - a place where I could get a much needed breather from a 5 year period  that really has been the worst in my life.   I'm moving on to better things and most likely a better hobby space to boot, so I have everything to look forward to.  But when I was isolated from friends and family, stuck in the worst job I've ever had and drowning in a see of assholes, I had somewhere fun to go where could do something I was passionate about and escape all the bullshit. 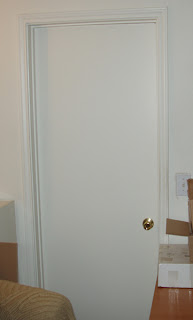 It's all packed now and while I will miss the sanctuary and what it represented, I'm looking forward to the possibilities of the hobby cave Mk3 and moving my hobby away from all the negativity in my life on the east coast.

I got back from the dumpser and got back to the hobby cave.  After a touch of vacuum maintenance, though.

First order of business was to get at all the little bits and such that had collected over the years.  Mostly it was toothpicks, paperclip bits and some tape.  Again, I'm not too sure the carpet can be saved, but I don't want anybody getting stabbed by all the sharp things that I carelessly left behind.

Plus, it's just part of being a good tenant.

To my surprise, the whole endeavor went a hell of a long way towards making the room look presentable.  Or at least bordering the concept. 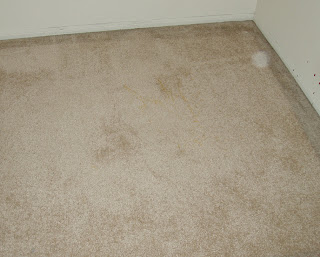 The gross foot-dirt stain got some love, but the results were much less impressive and further ruined by all those mysterious red paint spatters. 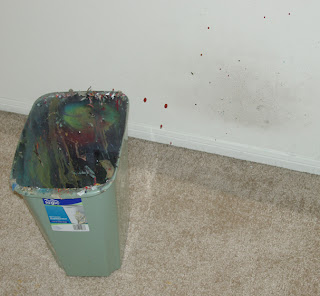 Speaking of gross, Hobby Trashcan 2000 is also on it's way to the dumpster.  There's no way in hell I want that thing anywhere near my good stuff.  Plus, I can get a larger one once I'm settle in.

The last thing to do for the actual hobby cave itself was to re-hang the door.  I had pulled it down to save space and keep it from getting beat up. 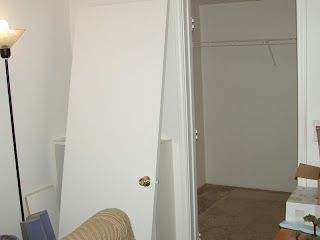 All I need to do now is wrap up my terrain boards and number the boxes.  Should be an update or two left in that.
at 3:44 PM 5 comments:

Well, the fun and interesting part is pretty much over (though there is one little bit of fun to be had) and I'm staring the worst aspect of this venture straight in the face.  And by that I mean the cleaning.  Blech.

The folding table is first up and mercifully easy. 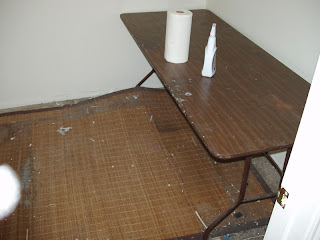 Followed by the rug thing I put down to try and collect some of the hobby dirt.  It's pretty gross and pretty torn up so it's just a matter of rolling it up, putting a bag on one end to catch the bits and chucking it in the dumpster. 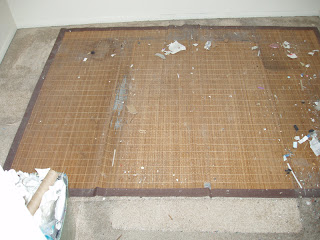 based on the amount of dirt around the edges of the rug, I was almost of the opinion that it had been a waste of a rug.

Then I pulled it up.

Ladies and gentleman what you are seeing is no illusion.  The elderly and those of you with weak hearts should leave the room. 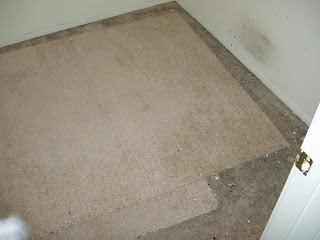 What you have just witnessed is the end result of years of hobbying over a light color carpet.

I'm too worried about it since the 5 years of habitation and the cats tender ministrations have ensured that the cheap carpets in the apartment will need to be replacde anyways, but I do need to vacuum up all the loose pointy bits and at least make an attempt at cleaning the schmutz off the place where I was resting my feet.

Welp, I'm off to get the vacuum up and running.  See you in a bit.